I think there are three basic positions that one could take on Article V:

1. It should not be reformed because it has worked well enough.

2. It should be reformed because it violates equality over the law and/or because it is too hard to amend the Constitution, but we should amend or repeal it according to the procedures of Article V.

Suppose that there is a national debate about the representational design of the Senate and Article V. The #2 people are not going to have any success because it does not make any logical sense to declare that Article V is so bad that it must be amended or repealed, while declaring that Article V is good enough to be used to amend Article V. Plus, the numbers just don’t work out for #2.

The closest the Electoral College ever came to being abolished was in 1970. An amendment proposal known as the Bayh-Celler Amendment passed the House in 1970 by a vote of 339-70. It narrowly failed to pass cloture votes in the Senate, by votes of 54-36 and 53-34. According to The New York Times, the first vote of 36 in opposition consisted of 18 Democrats and 18 Republicans, and was “almost entirely a coalition of Southerners and conservatives from small states who had protested that abolishing the Electoral College would reduce their states’ political influence.” Because roughly two-thirds of all members of the House come from large states, and one-third of all members of the Senate come from large states, that means that as many as 60 representatives and 20 senators from small states must have voted for the amendment. These votes constitute perhaps the high-water mark in all U.S. history of elected officials from small states volunteering to relinquish disproportionate constitutional voting power over the law.

The good news is that not everyone votes to preserve their disproportionate voting power. The bad news is that 61% of the Senate (53-34) is the best vote to reduce the disproportionate power of small-state citizens in over 200 years. That means that a strategy that relies on getting to 67% (2/3 of the Senate for amendment proposal, or 2/3 of the states to call an amendment convention), or to 75% (3/4 of state legislatures or conventions for ratification) is, well, not a strategy at all. It is an appeal to magic. It amounts to acquiescence in inequality.

I should acknowledge and endorse another plan for equality over the law that avoids Article V: National Popular Vote. It would ensure that the presidential candidate who gets the most votes will win. Maybe it will work.

D.C. citizens have struggled for congressional representation for a long time. Let’s take stock of the failures.

1. Congress proposed the District of Columbia Voting Rights Amendment in 1978. It would have treated D.C. as a state for congressional representation and the amendment process. It was ratified by only 16 states, expiring in 1985.

Why did this fail? Perhaps it is because D.C., with 0.2% of the nation’s population, would have had 2% of the voting power in the Senate – gross overrepresentation. Wyoming’s overrepresentation in the Senate is obnoxious enough. And the large states – so underrepresented in the Senate – would have had to put up with two more senators from a tiny place. It should not be surprising that none of the largest states at the time (California, New York, Texas, Pennsylvania, Illinois) were among the 16 states that voted for ratification.

2. D.C. applied for statehood under the name New Columbia. More technically, D.C. would have been shrunk to its monumental core, with the inhabited parts to become New Columbia. This measure was last defeated in the House in 1993 by a vote of 277 to 153.

Why did this fail? Again, this would have led to more malapportionment in the Senate.

But there is an additional cruel and ironic reason. The Twenty-third Amendment, which grants participation in the Electoral College to D.C., seems to treat D.C. as a permanently unique political entity. It would probably have to be repealed before statehood could be granted.

3. In Adams v. Clinton (2000), residents of D.C. sued for congressional representation, arguing that it was necessary because of the equal protection, privileges or immunities, due process, and/or republican guarantee clauses. They further argued that they should be able to vote in Maryland because they had “residual citizenship” in that state, due to Maryland’s land grant of D.C. of 1790. The U.S. District Court of D.C. Court rejected these arguments by a vote of 2-1.

Why did this fail? Those arguments are complicated.

The Fourteenth Amendment declares that Representatives shall be apportioned among the several States… The Seventeenth declares that the Senate of the United States shall be composed of two Senators from each State… This text seems to explicitly exclude representation for citizens in D.C.

4. Various proposals to grant D.C.a representative by federal statute have failed and will likely continue to fail. Look at the sad history.

Why did these fail? Again, they rely on a strained reading of (or blindness to) Fourteenth Amendment text.

5. Proposals for retrocession (for D.C. to rejoin Maryland) have gone nowhere.

Why? In part, neither D.C. nor Maryland seem very enthusiastic about it. Both have developed their own institutions and political identity; retrocession may seem unnatural. Also, because the current citizens of Maryland would have to share their two senators with these new voters, they would experience diminished voting power over the law.

This proposal of this website aligns the interests of D.C. with those of citizens of large states. Roughly two-thirds of U.S. citizens are underrepresented in the Senate. D.C. citizens would be wise to make them natural allies.

This proposal demonstrates seriousness about constitutional text. Article V does not claim to be exclusive and is not. The Twenty-third Amendment will be nullified by this proposed Section 4. Congressional representation for all citizens will be guaranteed by constitutional text. We should combine our fidelity to written constitutionalism with our commitment to political equality.

This proposal realizes a more rigorous standard of political equality than any of D.C.’s previous attempts. All citizens should be citizens of a state. Congress will no longer have plenary authority over the people in D.C. or the territories; congressional authority will be limited and enumerated over all citizens. All citizens should have representation in proportion to their numbers in both branches of Congress.

This will take courage. D.C. citizens should take a leap of faith and trust that majority of Americans are good and will eventually join in this endeavor. If courage is lacking, or clarity on political equality is absent, failure will likely continue.

It has been a long time. It is time to try something new. 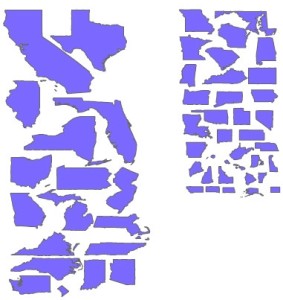 This is basic representational and strategic numeracy for the purposes of this project.

The population of the U.S. is a little over 300 million.

A state is small (and therefore its citizens are overrepresented in the Senate, Electoral College, and amendment power) if it has less than 2% of the U.S. population, or less than about 6 million people.

A state is large (and its citizens underrepresented) if it has more than 2% of the U.S. population.

About one-third of states are large, and two-thirds are small.

According to Article V, ratification is by three-fourths of state legislatures or conventions.

If we insist on using Article V to make Article V, the Senate, or the Electoral College proportional, a whole bunch of small states would have to vote against their own interests in relinquishing disproportionate political power. It has not happened.

If, on the other hand, we vote by citizen, it is a lot easier. Two-thirds of citizens can vote themselves more power – proportional to their numbers. No voting against personal interests is required.