It is essentially impossible for the people to end equal state suffrage in the Senate or in Article V by using Article V procedures.

The first obstacle would be the final clause of Article V, which seems to mandate unanimous state consent to end equal state suffrage. This requirement could in theory be amended away, but this is hard to imagine.

The main obstacle is ratification by three-fourths of state legislatures or state conventions. That is 38 states. Only 17 states are large states (meaning, states with a population of more than 2% of the U.S. population, thus, states which are underrepresented in the Senate). At least 21 small states (such as those in the red circle below) would have to vote to give up their disproportionate voting power in the Senate. 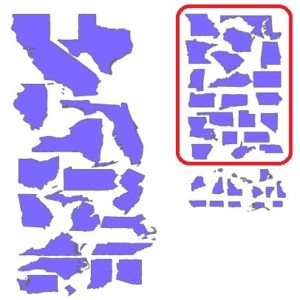 It has not happened in over 200 years.

It is impossible. We have to do something else.